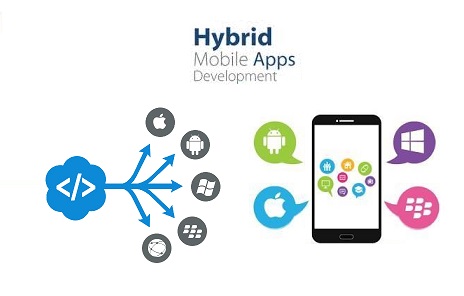 Hybrid apps are essentially web apps that have been put in a native app shell. Once they are downloaded from an app store and installed locally, the shell is able to connect to whatever capabilities the mobile platform provides through a browser that's embedded in the app.

A (hybrid app) is a software application that combines elements of both native apps and web applications. Hybrid apps are essentially web apps that have been put in a native app shell. Once they are downloaded from an app store and installed locally, the shell is able to connect to whatever capabilities the mobile platform provides through a browser that's embedded in the app. The browser and its plug-ins run on the back end and are invisible to the end user.

Hybrid apps are popular because they allow developers to write code for a mobile app once and still accommodate multiple platforms. Because hybrid apps add an extra layer between the source code and the target platform, they may perform slightly slower than native or web versions of the same app.

Hybrid apps work similar to Web apps but like native apps, are downloaded to the device. Similar to Web apps, hybrid apps are typically written in HTML 5, CSSand Javascript . Hybrid apps run code inside a container. The device's browser engine is used to render HTML and JavaScript and native APIs to access device-specific hardware.

Although a hybrid app will typically share similar navigation elements as a Web app, whether or not the application can work offline depends on its functionalities. If an application does not need support from a database, then it can be made to function offline.

Pros of hybrid apps include:

Some cons, however, include:

What are hybrid mobile apps?

Hybrid mobile apps are applications that are installed on a device, just like any other app. What differentiates them is the fact they possess elements from native apps, applications developed for a specific platform such as iOS or Android, with elements from web apps, websites that act like apps but are not installed on a device but are accessed on the Internet via a browser.

Hybrid apps are deployed in a native container that uses a mobile WebView object. When the app is used, this object displays web content thanks to the use of web technologies (CSS, JavaScript, HTML, HTML5).

It is in fact displaying web pages from a desktop website that are adapted to a WebView display. The web content can either be displayed as soon as the app is opened or for certain parts of the app only i.e. for the purchase funnel.

In order to access a device's hardware features (accelerometer, camera, contacts…) for which the native apps are installed, it is possible to include native elements of each platform’s user interfaces (iOS, Android): native code will be used to access the specific features in order to create a seamless user experience. Hybrid apps can also rely on platforms that offer JavaScript APIs if those functionalities are called within a WebView.

What are the advantages of hybrid apps?

What are the limitations of hybrid apps?